November 19, 2014 by rootsandrecipes
Here is Rebecca and Myrite’s (very thorough) rundown of last weekend’s Restaurant Day November edition in Montreal. After hosting our own Roots & Recipes pop-up restaurant last August, it was a lot of fun to take the day off and check out what other people were doing. Don’t worry – we’ll be back at it next time around.

Myrite: Cozy ambiance. It was a little too cold for us to start the day off with juice, though my sister got the green-coconut one and loved it! The apple pie was a classic recipe – and Stephanie apologized that it wasn’t vegan but “if you eat butter” than she highly recommended trying it with the vegan home made ice cream. When we asked what the secret was to the consistency, she said it was a coconut milk base, and the ice cream was perfected over a long time with much practice in her ice cream maker.

Rebecca: Well she definitely perfected it as the vegan bourbon-vanilla ice cream was amazing – better than coconut bliss! It was a bit weird to start the day with apple pie and ice cream, but I’m not complaining. 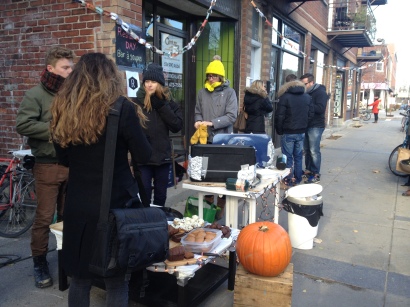 Myrite: We tried the ‘borscht ultra rouge’ that was “reinvented by Florence”. It was more chunky than soupy, with beans and big chunks of beets that left your teeth red. Rebecca had the zucchini bread which we thought would be savoury, but was surprisingly sweet, so not the best soup accompaniment. I also got the ginger tea since it was freezing outside. It had chunks of ginger and honey, but would be nice with some mint or spice added. Rebecca’s hot cider was much more flavorful and I had fomo.

Rebecca: This was the only restaurant that was fully outdoors and I liked that they just sort of took over the sidewalk  – but we did get chilly quite quickly, so the hot apple cider was much-appreciated. 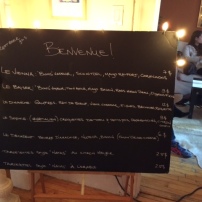 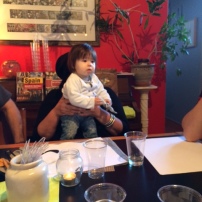 Myrite: This was by far my favourite stop of all. It was professionally run, with a young teenage waitress who seated guests at tables throughout the mile-end apartment. We were seated at the big central table with other guests. The atmosphere was cozy and convivial. It was even BYO and if it hadn’t been the early afternoon, we would have been happy to warm up there for a while. I liked the food so much that I came back a few hours later with my husband and got to have a few more bites of his sandwich, which he described as one of the best sandwiches he’s eaten all year. It reminded us of a place in Portland called Even Tide that made lobster rolls in steamed buns with modern toppings. Delicious!

Rebecca: Definitely the highest-calibre of restaurant that we visited, so it was no surprise to find out that the chef was a professional (former food truck owner with a cookbook coming out). Apart from the food it was also the only one to really take the restaurant concept literally, with different tables, cute paper placemats and servers.

Here’s what we ordered:
We shared 2 sandwiches: the first was called “Le Baiser”, a steamed rice bun dyed pink with beet juice (we think), and filled with spicy tuna tartare, horse radish mayo (we replaced the bacon mayo) slices of watermelon radish and fried crunchy shallots. They contrast between the soft bun and crunchy radishes and shallots was a great choice.

The second sandwich “Le Sophie” was vegan. Quite a sizeable sandwich, this was a homemade naan bread coloured yellow with turmeric and stuffed with tofu and pea croquettes, lemon confit, pepperoncini and cilantro. The croquettes were soft, warm and flavorful. The sandwich was topped with a sauce which we were trying to decode. It tasted like it had a tahini base, but we were satisfied leaving some mysteries unsolved.

The other sandwiches we saw come out of the kitchen looked amazing, like

“Le Decadent” a grilled cheese style sandwich made with peanut butter, nuttella and bacon or “Le Dimanche”, a waffle sandwich filled with roti de boeuf that had been marinaded in Dispatch Coffee cold brew overnight, figs and aged cheddar. These were served with a little paper swan balancing on a toothpick!

Lastly we ended our meal with a take on a Portugese Nata made by Emilie’s mother. She made two varieties, one was maple syrup and the other was meyer lemon. We ordered the lemon one which reminded us of lemon curd. Delicious!!

After we dined and couldn’t stop talking about how good each bite was, we asked our waitress if we could speak to the chef. That’s when we met Emilie Gauthier, who we found out used to own a food truck called “La Mangeoire” which also featured gourmet sandwiches from around the world. Since selling her food truck, she has been working on her new cookbook, “Histoire de Sandwichs, Gastronomie de Rue” coming out in the spring. She saw restaurant day as a way to promote her new cookbook and bring her community of friends together. Stay tuned – we hope to do an interview with Emilie about her Gaspesian roots and recipes.

Myrite: This place was packed the first time we walked in. There was a 20 minute lineup, so we came back after visiting the Mangeoire restaurant. We were hoping to try the laks Smorrebrod (open danish sandwich on thin rye bread, served with smoked salmon, mustard, honey and dill, radish and chives) but they were sold out (people seemed to be enjoying the veggie version, served with a squash spread, with slices of beets and creme fraiche). So we got the Glogg and I ordered a cinnamon and cardamon brioche which was fresh, warm and not too sweet. Yummy! I loved the Glogg- which was a Danish-inspired mulled wine served with sliced blanched almonds and dried fruit inside. It was around 4pm by that time so we figured it was late enough to warm up with a boozy drink.

Rebecca: These girls definitely know how to throw a party and there is always attention to details, like stamped cups. The Glogg was perfect to relax with – I’ve never had nuts in my mulled wine before. It was CRAZY when we first came in so we were glad that it had mellowed down when we returned a bit later and we were able to chill out for a bit. 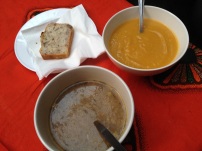 Myrite: Nice patio at the back of this apartment, with covered terrace, tables and couches. We warmed up here for a while and got to try two soups. One was a butternut squash and apple soup with maple syrup that was pureed and creamy, and delicious. The other soup was an onion-guinness soup with potato and tarragon. This soup was less flavorful and we were thankful for the salt and pepper shakers on the table to spice it up. Some shredded aged cheddar would have made it a lot better. We also got a ‘cake salé’ of Roquefort cheese, pear and walnuts, but for all the flavourful-sounding ingredients it was underwhelming and not seasoned at all. I don’t think I had a bite filled with any of the apparent ingredients in it, but maybe Rebecca did? It would have been better toasted or served warm as well. All in all this was a great stop to warm up with some soup and they were also serving more mulled wine. Soups and mulled wine/ciders were apparent throughout the different stops we made, which was a great call considering what a cold day it was!

Rebecca: Agree with most of Myrite’s comments, though I didn’t mind the ‘cake salé’ – maybe I did get all the stuff in my bites. Super cute set-up under the covered patio, I wish I had one of these! There appeared to be tons of people inside, not sure if they were all helping to cook or just hang out, but the kitchen was big and every surface was covered with stuff. With an extensive menu of 4 soups and 3 cakes, they seemed to have a lot going on. 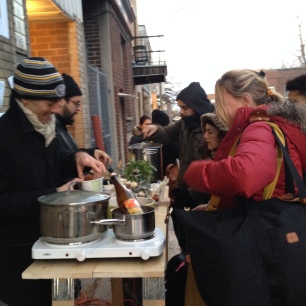 Myrite: We sat in the entrance of the building to eat our food because it was so cold outside, and chairs were set up indoors. The only thing that bothered me here was that prices weren’t listed at the vendors table, so I was surprised to learn that the Chili was $6. It had a quinoa-rice base, topped with the chili made from mix of beans and tomatoes, and topped with your choice of coriander or basil and sour cream or yogurt. When asked for more spice, the servers brought down from his apartment his special stash of Argentinian dried chilis! The menu here was a little all over the place with Chocolate mousse, borscht, chili, cupcakes and tiny homemade macarons and hot sake.

Rebecca: Was pretty stuffed by this point, but I did have a little sake and a matcha-flavoured macaron made by Emilie Yamade of Békingu who specializes in Japanese-inspired baked goods. It was delicious! It was also kind of fun to invade the public entrance of this apartment building.

Myrite: I got to pass by the pumpkin party at Depanneur Cafe hosted by Stephanie Audet who was the former chef at Crudessence. The space was transformed and decorated halloween-style with pumpkins filled with candles. Someone was playing the piano and every seat was taken as the cafe was packed with people trying everything on the menu. By that point I was pretty stuffed and on my way to a night out where I knew more food would await me, so I took pictures of what everyone else was enjoying – pumpkin soup served in a pumpkin, pumpkin corn bread, and pumpkin rum punch. I took a pumpkin-spiced cupcake to go, because they looked delish! But they tasted like raw marzipan, and when I brought some later for my friends to try they joked that it had the consistency of play doh’ so I don’t think it was a big hit. If I had more of an appetite, I would have stayed to try the soup and cornbread!

Rebecca: This was my friend Jordan’s pop-up and I got there super early before anything was ready – I made myself useful by helping to peel beets. Jordan, Paige and Josh had come up with 5 or so really small nordic and autumn-inspired dishes ($2-3) to be paired with two wines they had chosen from the SAQ. People started trickling in closer to 9 though the event officially started at 8. Soon the living room had filled up and the plates were coming out. Everything was really good, but my favourite was probably the savoury spice bread with cranberry compote, and the pickeled mackerel with homemade yoghurt and dill. Jordan had invited lots of his own friends and almost forgotten he had posted the restaurant as part of Restaurant Day, so he was pleasantly surprised that strangers were showing up and taking a seat at his big dining room table. Everyone seemed to be having a great time and enjoying the food when I left, exhausted from the day’s activities.

← Photos from “Grandma’s Kitchen Alley”
We are having a Chanukah Party on Saturday December 20th! →

One thought on “Roots & Recipes does Restaurant Day”