Like every other Israeli kid, my mother would ruin her appetite for dinner by spending whatever shekels she could collect on a sandwich at “Melech Ha Falafel” (The Falafel King) which was conveniently located around the corner from her house.  She tried not to stain her shirt while eating the messy, greasy contents in case she would be discovered. Her strict father forbade her from eating street food which he deemed was fit for animals, but my mother never one to be told what to do, found that falafel was worth taking her chances.

Years later, when she graduated from nursing school and began to work at a children’s hospital, a father came in with the youngest of his seven children. His little boy was running a high fever and the family was visibly distraught while waiting for the test results. My mother’s gentle disposition calmed him down and she assured him that he could go home and rest while she took care of his son. Day after day the father and his family came to visit and he would always ask for my mother, trusting her entirely in the care of his son. Over their time together she learned more about him and discovered that he was in fact the owner of “Melech Ha Falafel” the corner falafel joint that my mother went to growing up. My mother was star struck and recounted her memories of sneaking to get one of his falafel’s after school. He smiled and laughed and my mother gathered all the nerve she had to ask him for his falafel recipe before they went their separate ways. He told her it was a family secret. Then he quickly explained how to make the best falafel in Israel. She had to remember every word because she was not allowed to write it down.

Fast forward a few years to when my mother marries my father. She emigrates to America and later to Canada. She has four young daughters and is far away from everything: her native tongue, her family, and even her nursing career (she could no longer practice in America). Whenever she has a longing for home, the memory of the recipe that she carried with her comes back to her. She goes into her kitchen, soaks the chickpeas and begins the ritual of making her falafel. A taste of home.

You can hear more about this story in our upcoming Roots and Recipe podcast featuring my mother Nechama. Until then, show us how much you love falafel (and us!) by voting for us in the Ultimate Jewish Food Competition. Also, if you don’t already then please go Like us on Facebook. 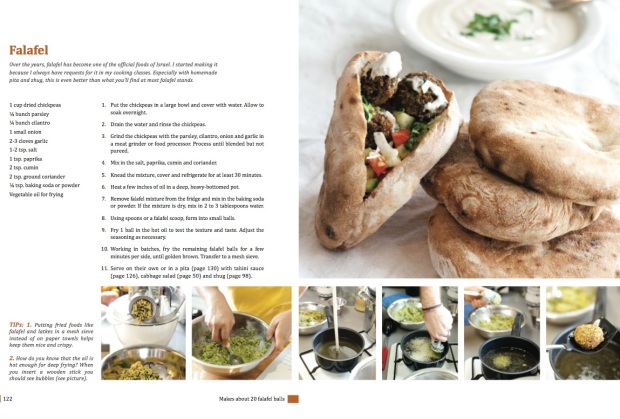 Not my mother’s falafel, but pretty close to the real thing…

P.S: In case you haven’t already seen our Roots & Recipes Webisodes, we have a new video up about our Iraqi Grandmother, Evette Mashaal and the story behind her “Star Cookies” or Massafan (almond cookies) that she bakes with her two granddaughters.

← Episode 4 features some simple and delicious cookies!
Thinking about the Philippines… →

One thought on “Ima’s Falafel (Part 2): The Recipe”