At 5:00 PM on Sunday, April 7th, 2013, there were three slightly hesitant doorbell rings in Montreal’s Plateau/Mile-End areas. Participants of Montreal’s first ‘Mile-End Mimouna Hop’ had been given the secret locations last minute and were separated into three groups to determine their starting point. Before the guests arrived, the three Mimouna hosts and their kitchen helpers had worked tirelessly to create their take on the Mimouna table, a spread of Moroccan sweets and dishes that are traditionally made to celebrate the end of Passover.

Five days earlier, the volunteer hosts, their helpers, and the Roots & Recipes team had been graciously welcomed into a number of Moroccan homes for the Mimouna festivities to help with preparation and to partake in the traditions, music and of course – feasting. At the Cohen-Fourniers, for example, Aaron taught the group to make mufleta, the handmade crêpes eaten with butter and honey or jam that traditionally represent the first use of flour after Passover (recipe here). This special evening provided inspiration for the ‘mock’ Mimounas which the brave volunteers would be throwing in their own homes for complete strangers.

As the first wave of guests showed up and were invited to eat, any tentativeness quickly melted away. Once people understood that they could really just eat and mingle with no formalities, they got to it immediately. As one participant later wrote,

I loved the openness of the event, and how everyone was meant to feel comfortable and at home in all these private spaces.

The idea was that participants would try to visit all three Mimounas within the allotted two hours, seeing both new and familiar faces at each house.

Each Mimouna was different; Jennifer had filled a beautiful, formal table with countless homemade delicacies. Alizah’s Mimouna was a lively kitchen party with a hands-on mufleta-making station. Netta was the perfect hostess, replenishing the food as it got eaten and explaining the traditions she had learned as everyone settled comfortably in her living room for some Moroccan mint tea and cookies. As another participant remarked,

Coming into a house of strangers and receiving a warm greeting: so unusual, for us, these days, and felt like a reawakening of some old custom. 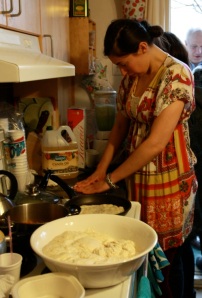 The last stop was La Khaima restaurant, where 50+ people were handed a traditional glass of buttermilk upon arrival and invited to sit around three low tables. After some explanation and discussion led by the Roots & Recipes team, the hosts took some time to talk about their individual experiences participating in the Mimouna Hop. Then it was time for dinner – mufleta cooked in honey to re-whet the appetite (and for those who may have missed out earlier), followed by pastilla, the traditional Moroccan meat pie filled with chicken, cinnamon, onions and raisins, and a vegetable couscous. Atigh, owner of La Khaima and our host for the evening, also provided us with his signature hibiscus juice. As we ate, we were treated to some kora playing by the talented Steven Feller.

The majority of the participants, which included both Ashkenazi and Sephardic Jews as well as non-Jews, had never heard of the Mimouna tradition and were thrilled to be ‘let in’ on such a charming tradition. At Roots & Recipes we believe that cross-cultural sharing is an excellent starting point for understanding and tolerance, which was confirmed by one comment we received,

I learned a lot about the Sephardic tradition–something that I believe is important for expanding our understanding of what it means to be Jewish.

Our collective Jewish identity is made up of countless traditions and variations from all over the world; the Mimouna is just one of these and we are delighted to have shared it with so many people.

Roots & Recipes would like to thank A Bit Off the Top, La Khaima, our volunteers, and the Cohen-Fourniers and other families who invited us into their homes. 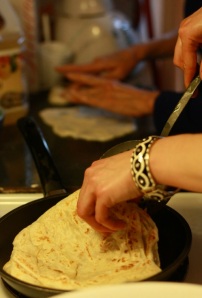 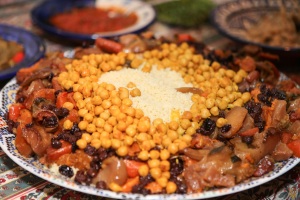 couscous at the Cohen-Fourniers
© Sophie Bertrand

Spread at the Cohen-Fourniers
© Sophie Bertrand