Sara Winer is like a second mother to me. She is my mother’s best friend from Boston where my family used to live. They raised their families side by side, but when our family moved to Montreal, they made sure to stay in touch and we have spent countless years celebrating the Jewish holidays together. As the years have passed and Sara and Marc’s three sons have grown into adults, Sara herself has become a Bubbie to three grandchildren (as my own mother watched in both awe and envy- still waiting to be crowned a grandmother).

Sara is famous for her traditional Jewish recipes, and one of my favourites (aside from her chicken soup and sweet and sour meatballs) is the cheese kugel she prepares to break the fast on Yom Kippur. I was surprised to learn that  she doesn’t serve this delicious dish exclusively for the holidays, but also makes it during the year for her husband Marc to take for lunch at work (because like every Jewish mother knows, you make more of a dish so you can have leftovers later). She often prepares one or two kugels at a time, cuts them into serving size portions, then wraps and freezes them. A square can easily be popped into the microwave to be enjoyed as a nice warm lunch. (I also have a few squares of Sara’s kugel in my own freezer!)

When I asked her sons to share their memories about their grandmother’s kugel recipe, her oldest son Yishai shared that his mother’s kugel is:

Better than heaven! It is comfort food at  it’s best. I love the golden brown noodles that would stick out the top. [I always choose] the corner piece of course.

All I can do is think about how awesome it is…It feels like love from my mom, which is what it is. I feel like a kid thinking about it.

Her youngest son, David (now a chef and restaurant owner in Tel Aviv) shared that,

I have never even tried to make it, but I have been with her many times when she has. The recipe seems simple enough, and I’m sure I could do it myself, but it would not nearly be as good as mom’s. I think it’s bubbie Ida’s recipe if I’m not mistaken, but it is one of  those things you don’t mess with. Even mom still cooks with the recipe card just to make sure.

So Sara, where did the recipe originate?

This recipe was given to me by my dear mother-in-law, (Bubbie Ida) and she received it from a caterer. Story is that she went to some affair and loved the kugel and asked the caterer to share the recipe with her and they did!! 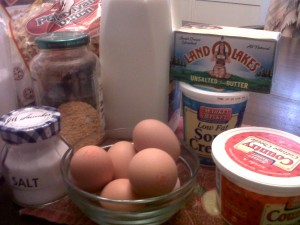 all the yummy ingredients that go into making her kugel

Has the recipe changed at all over the years?

Over the years the recipe has changed very little. However, I once made it and ran out of corn flake crumbs so I took a cup of frosted flakes and processed them in the food processor and added some cinnamon before topping the kugel. I’ve also substituted the sour cream when I forgot to buy it, with a container of whipped cream cheese and that was also delicious.

← The Spring of Paradise – Ginger Juice
Here is Episode 2! →