Rebecca Lessard is a mediamaker and musician from Montreal who loves eating,  cooking, tasting, smelling and learning about food from different cultures.

Background: My family would probably get the world record for getting through our Passover Haggadah the fastest. Though come to think of it we never really ever got  through it, skipping major portions to get to the songs, and abandoning the books after step 11, Shulchan Orech, which, simply put, is dinner. We nibbled our way through hard-boiled eggs dyed brown with onion skins, lamb shanks, and Charoset (made with dates and nuts in the Sephardic tradition rather than apples) during the first part of the evening, always making sure to leave room for the main event. We polished off heaping plates of baked chicken, rice with pine nuts, and Hammod (sour meatballs), along with vegetables, a good salad, and, in recent years, a vegetarian option. On Rosh Hashannah, there was Loubia, a stew with veal and black-eyed-peas to represent abundance and fertility, and calf brains because it was the ‘head of the year’. On Yom Kippur we broke the fast with Ka’ak and Lebneh. Mostly secular Jews by this point, we celebrate the holidays by eating, and my grandmother, Rachel Safdie (nee Esses) – until she passed away at the age of 96 in 2011 – was the head chef.

As a second generation Canadian on both sides, my only real living links to my roots are my grandmothers. In my own travels I’ve managed to visit a few of the places where they grew up, like the suburb of Manchester, England, where my maternal grandmother’s old house was turned into a pub that has since closed down. A book was written chronicling the migration and resulting community of Syrian Jews in Manchester and other cities. My grandmother has stories about many of the names listed in the book, families which she grew up with, before leaving her birthplace the age of 23 to get married.

I’ve visited Bonyhád, where my father’s mother Eva Lessard (nee Kramer)  lived until her early teens when the Nazis collected all the Jews from the town and sent them to concentration camps across the European continent. Very few survived. A book has been written about them as well.

I think about the two migrations which eventually resulted in my birth, the series of events that led to Montreal, where my parents were born, where they went to high school together, and where they reconnected years later through music. My grandmother, Rachel, tells the story of the man my grandfather, Leon, met on a plane. Leon had left his young family back in Palestine, or had it become Israel by then? In Paris, he worked endlessly to obtain the funds and papers needed to give them a new life. His brother had gone to Brazil; it was suggested that they settle there. But my grandfather met a man on a plane who told him that Canada was the greatest country in the world, and my grandfather believed it. He told his wife that they would go to Canada.

Meanwhile, after being taken to Auschwitz-Birkenau, my grandmother Eva and her mother Renee were liberated from Salzwedel, Germany by the American army in the Summer of 1945. She finished high school in Germany, in the country which had stolen her childhood, and her father. In 1949, both mother and daughter were accepted to immigrate to Canada, and in May 1949, they arrived in Montreal, Quebec. My grandmother doesn’t cook much anymore, but she loves to go out for Hungarian food, which we would do as a family every so often; Chicken Paprikash with Nokedli (dumplings) and cucumber salad, with a chestnut puree for dessert. Eva passed away in December of 2014. 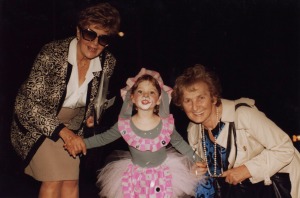 with my two grandmothers, Rachel (left) and Eva (right)

I started Roots & Recipes because I’d like to collect these food stories, in the form of a series of inter-generational cooking webisodes, starting with my own family, but hopefully going further than that. Montreal is more of a salad bowl than a melting pot, and I know I won’t have to look far.

One thought on “Rebecca Lessard”