Now, let’s agree on something, Montreal has some pretty damn good restaurants. Yet, for some reason, every time I have gone out on a Sunday night in search of yummy and delicious food to start the week off right, I have fallen short of any options. I was thus very happy to learn that two young Montreal chefs, Avi Gross-Grand  and Luis Tovar have embraced an ingenious model: the pop up restaurant.

Some of you might have had the pleasure of being at the first Wandering Chew Pop Up dinner, at café Zosha. It was a smashing success, and we were all eagerly awaiting the next one!

Also located at Café Zosha, Avi and Luis explore themes that we love: awesome middle-eastern style cuisine and recipes from their families. Each dish had a little story associated with it that the chefs were happy to share. 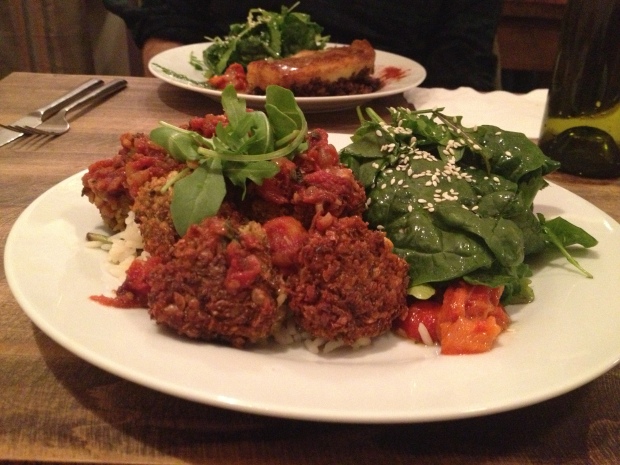 Luis, originally from Venezuela, grew up with a mother who worked in an immigrant center. She would regularly come home with many different recipes that she learned from migrants she worked with. One of them was these “Albondigas”. Traditionally Spanish, albondigas are similar to falafel. Fried lentils, (they can also be made with meat), these miniature no-meat-balls are delicious and served with a spicy tomato sauce. They are especially tasty with the eggplant escabeche and the roasted peppers that accompany them at Avi and Luis’s restaurant.

Avi is from Ontario, “the WASPiest part”, he jokes. His father is a culinary tinkerer, who taught Avi to play around with dishes. Indeed the “Emerald dip” on the menu is Avi’s take on one of his father’s experiments. I would have never had guessed that frozen peas could form the base for such a subtle and refreshing dip.

The menu changes every four weeks. They are open every Saturday and Sunday, at Café Zosha, corner Parc and Bernard. Oh, and the meal this week will be accompanied by live Gypsy music !

To vote for falafel: http://www.abitoffthetop.com/ujfc/

One thought on “Albondigas are “falafel-ish””